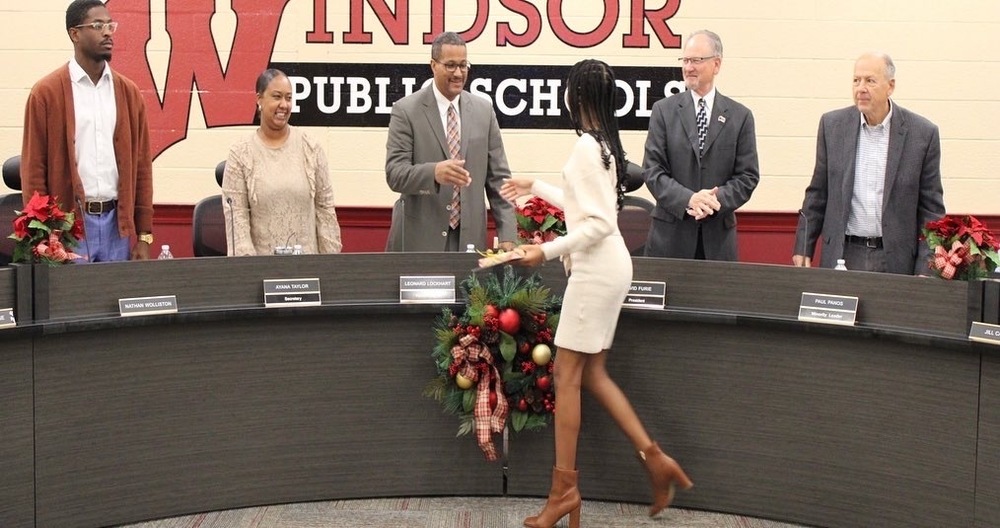 The Connecticut Association of Public School Superintendents Student Leadership Award is given to three students at both Sage Park Middle School and Windsor High School who show leadership to the school, academic prowess relative to ability, and service to others in the community. The goal of the award is to focus on students whose accomplishments and activities go beyond academic success and include service and leadership, making them role models for other students.

The awards are presented by Mrs. Jorgensen of SPMS and Mr. Parker of WHS.  Check out the outstanding accomplishments of the students below! 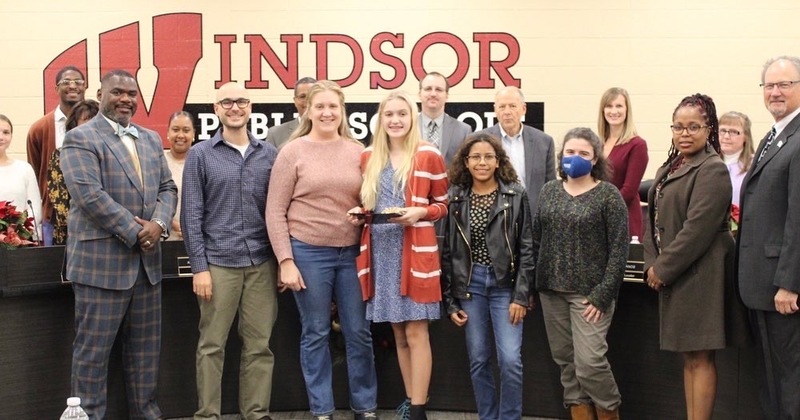 It is with great honor that I present the CONNECTICUT ASSOCIATION OF PUBLIC SCHOOL SUPERINTENDENTS award of Community Service to Sophia Mancino.

Sophia is an altruist in and out of school and definitely a force to be reckoned with. Sophia has
volunteered for the Friends Of Windsor Animal Care and Control. She has fundraised to support the FOWACC in buying oxygen masks for service dogs that help firefighters, or dogs that were caught in fires. Sophia has also volunteered her time to help walk, feed and play with the animals that were being fostered there. In addition, she has fostered dogs, providing a safe and happy home for them while they go through the adoption process.

Sophia is a member of Villari's martial arts, and within that organization, she is a member of the STORM team, Student Team Of Role Models. Members of the STORM team often volunteer for movie nights, day camps, and events. While at the events STORM team members help with younger children, by serving food, and playing games. In the fall of 2021, Sophia started volunteering as a coach at Windsor Soccer Club. She has spent many Saturdays coaching until most recently this fall age group kindergarten through first grade and 2-4-year-olds.

In addition to all of the work Sophia does outside of school, she has been a member of SPMS
Builders Club since sixth grade. As a member of the builders club, Sophia has participated in many food drives,  coat drives, and clothing drives, as well as supporting the Leukemia and Lymphoma Society support.

Ms. Hislop, Sophia's Technology Student association advisor shared: "Sophia, is dedicated to finding ways to make things better for projects, by helping others and trying to include everyone. She always helps out during set up and competition days as well as helps younger students at competitions with their robots from other schools/teams." "Sophia Mancino has been a part of the Sage Park Live News team from its onset in addition to the other programs, she's involved in such as Chargers Choir, National Junior Honor Society, Sage Park Windsor Leos, and Food Bank.

Ms. Haynes, Sophia's ELA Teacher commented, "Sophia Mancino is a hard-working and dedicated student.  She is a leader in the school and has worked with various organizations to help better her community.  She is a newly inducted member of the National Junior Honor Society and is interested in coming up with strategies to aid students with managing their mental health. She has met with her principal to share ideas of ways to support students' mental health in the building. Sophia is motivated to make school a better place for all students." Her Social Studies teacher, Ms Ochman also noted, "Sophia is a bright, shining example of being "the change she would like to see in the world." Sophia truly possesses an altruistic spirit and is conscientious and empathetic in her actions and choices. I couldn't imagine a student more deserving of this honor." 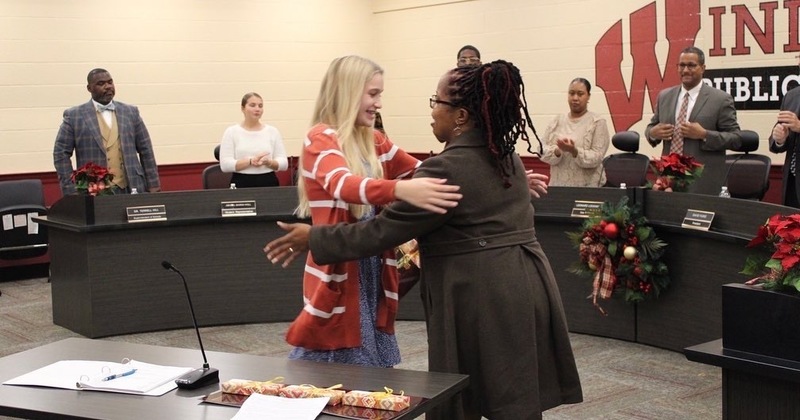 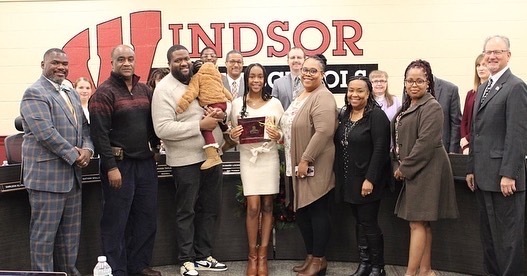 It is with great honor that I present the CONNECTICUT ASSOCIATION OF
PUBLIC SCHOOL SUPERINTENDENTS award For Academic Excellence to Daisy
Wimberly.

This award is one of many awards that Daisy has received while at school. She's
been recognized as a high honor and honor student throughout her middle school career. In
addition, Daisy has also been placed in both math and reading challenge classes for her time at
Sage. In 2019 Daisy became a member of the Connecticut Kid Governor cabinet and is
currently a member of their advisory board. She was also recently chosen to participate in her
school's leadership program.

Daisy is a determined and disciplined student. She has maintained her Very Invested
Person status for the past two years, and takes pride in her ability to follow the Sage Park core
values of being safe, responsible, and respectful. In addition, Daisy also exhibits determination
and discipline outside of school; as a competitive dancer, all of these traits have assisted in her
success. Her most difficult accomplishment so far would be balancing her school work and
dance schedule. Feeling overwhelmed was new for her but didn't deter her from being her best.
Daisy continues to persevere and give it her all every day while doing the things she loves most.
She currently has all As and recently received a Student of the Month award.

Daisy credits her achievements to her persistence and determination to succeed. She's
developed a vast knowledge bank of everything she's learned in her Social Studies, Math, and ELA classes. Not only does she use this knowledge for herself but also for others around her, knowing that she's helped another person become successful satisfies her. Daisy's EL teacher, Ms. Renert said, 'Daisy is a leader in the classroom and encourages her peers to put in their best
effort and be more involved. She always excels academically and helps others to better
understand the content."  Daisy's math teacher, Ms. Nine says, *Daisy is determined to be
successful and is an incredibly hard worker. She is passionate, caring, and such an incredible
addition to my classroom. I am so proud of all she has accomplished and I am eager to see
what she will do in the future!" Finally. Daisy's Social Studios teacher, Mr. Gurora said, "Daisy
is a confident hard worker. She makes her goals clear and sets out to achieve them at every
opportunity, She la driven, shows signs of leadership, and is a pleasure to have in my class." Daisy
is  a persistent student and enjoys pushing herself, I look forward to seeing great things from
Daisy in the future! Congratulations DAISY! 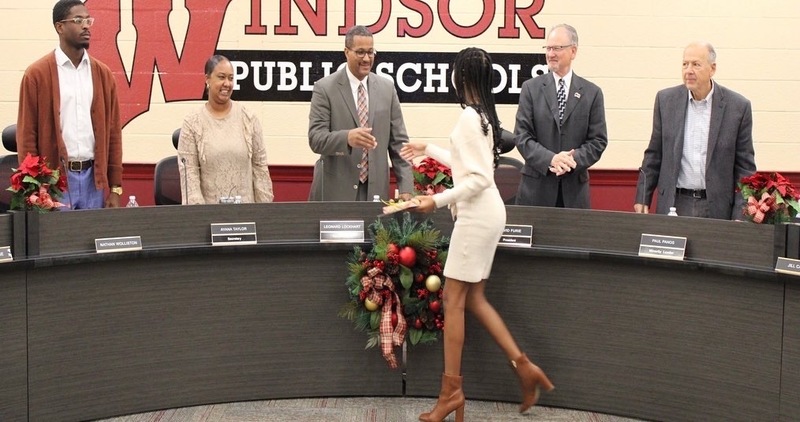 The CT Association of Public School Superintendents Leadership Award goes to Joshua Looby. Josh Looby started helping his community when he was very young.  In fifth grade, before the pandemic, he joined the Clover Street School K-Kids Club.  With this group Josh collected items for Bushnell Park's homeless, collected goods and wrote letters for active duty military members and sung Christmas carols to the elderly at Kimbery Hall. Over the past few years, Josh and his family have also participated in Windsor's Project Santa. Project Santa allows others to fulfill a family's wishlist of clothing, toys, bedding, and other necessities for Christmas.

Currently, at Sage Park Middle School, Josh has participated in various extracurricular
programs including the Clued-In cluster, the cross-country team, and Josh also plans on
going out for track in the Spring.

In addition to his extracurricular, Josh has also earned several academic awards. Some
of these achievements include several student of the month awards in every subject, high
honors every quarter in sixth and seventh grade, and the top achievement year-end awards in
every subject. He was one of two students to get the Scorch Award in sixth grade,
demonstrating the Sage Park core values, and considered a leader by his classmates. In
seventh grade, Josh earned the William Sanders Award by exhibiting ideals of citizenship,
consistent performance, and overall spirit essential to the school. This year, Josh was selected
to be a member of the Leadership and Future Problem Solvers. And finally last week he was
inducted into the National Junior Honor Society.

Josh's Social Studies teacher, Mr. Gurrera, notes that "Josh consistently hands in
exemplary work but is also consistently humble. He is not afraid to answer questions, he leads
by example and helps other students in & a non-judgmental way. He is an invaluable addition to
my class." Josh's Algebra teacher, Ms. Burke, also says "Josh never fails to impress me with
his determination, dedication, and leadership skills while working with his peers. He is a very
strong math student and demonstrates conceptual understanding of our 8th grade honors
Algebra curriculum. Josh shows an immense amount of promise in everything he puts his mind
to. I am honored to have him as a student." 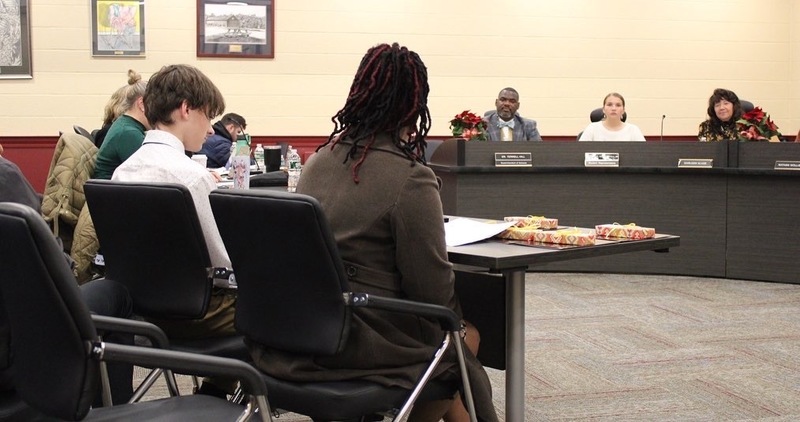 Joshua and Principal Jorgensen during the November 15th BOE Meeting.